Just a quick post to share with you because I see people all too often struggling with creating nice hedges in their Mediterranean garden.

The owner of this garden told me that his hedge is 3 years old and for some mysterious reason it’s “not growing“.

Here it is, Metrosideros buxifolia planted in a row, and one of the individual bushes from close-by: 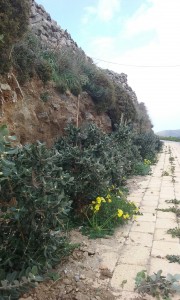 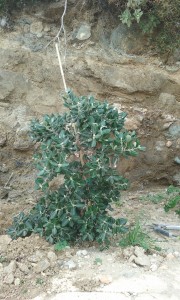 Now, there is nothing wrong with these plants. They are actually growing very nicely, but the problem is they are not going how we want them to grow!

Metrosideros is a great hedge material, withstands harsh winds, drought, not fussy about soil and grows relatively quickly. But as all bushes, if you would like them them to grow in a nice straight line with a defined width, you have to prune them accordingly!

What happens here that the bushes on the picture had an excessive growth on the bottom (where it’s nice and protected from the elements) so middle and top shoots were not stimulated to grow.

If you want the hedge to grow “sideways” and upwards, you must clean the bottom 40-50 cm of the bush and any downward growing shoots even further up than that. Something like that: 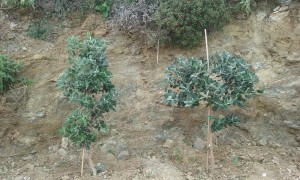 Apologies for the photos, not best quality and the sun was not our either.

I do hope you can see that the bottom of the row is nice and clear now and upward grows in encouraged.

Also cutting in half side-shoots encourages the bush bringing out more of them and makes the hedge fuller so these bushes in a years time should almost touch each other and grow at least 50-60 cm in height.

Other great, tried and tested hedging plants in the Mediterranean basin are:

Send us an inquiry